25 of the World’s Most Beautiful Landmarks 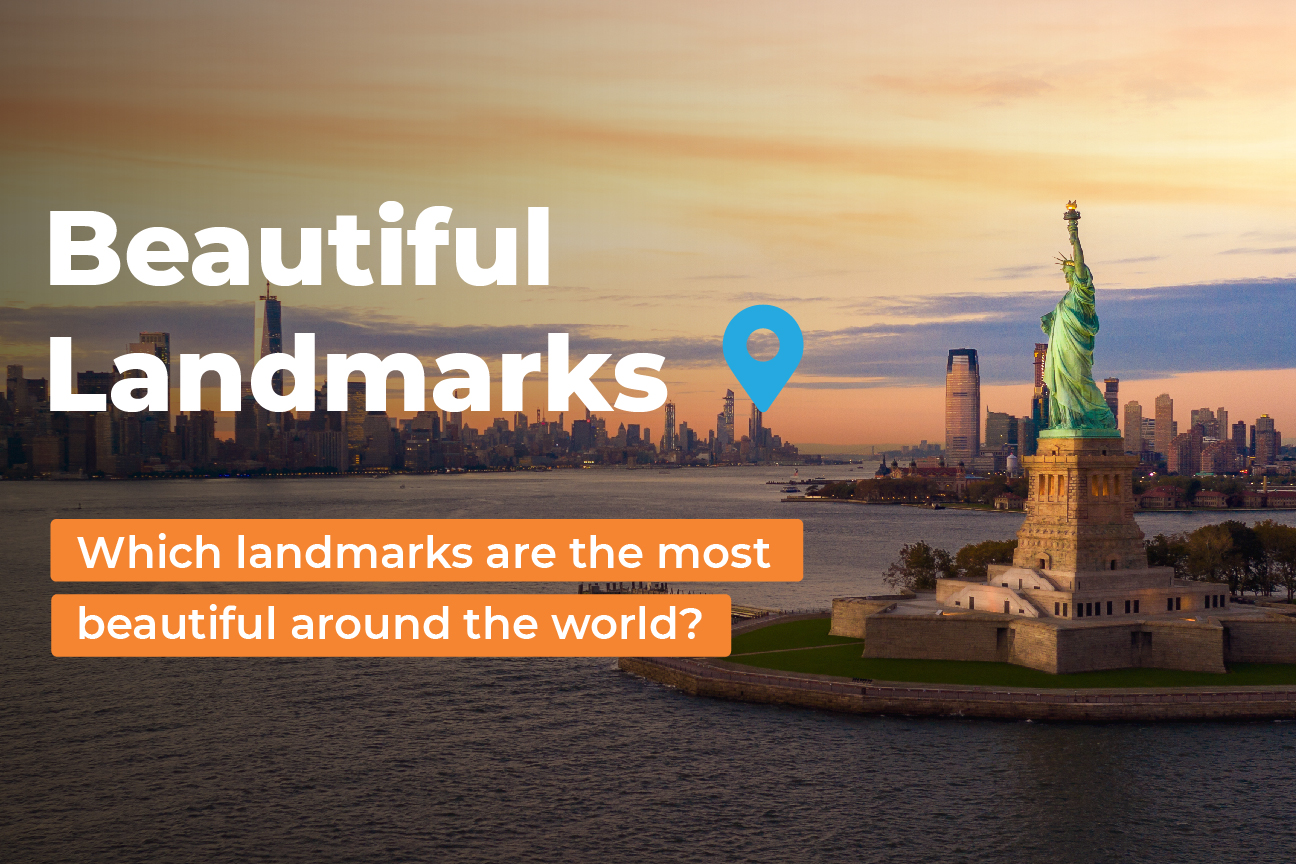 Which landmarks are the most beautiful around the world?

In a world where international travel is opening back up, more and more people are parking at the airport and venturing abroad to tick off the natural and architectural wonders that are on their travel lists.

From the Eiffel Tower to the Statue of Liberty these landmarks are iconic, but which are the most beautiful?

We analyzed Tripadvisor reviews for famous landmarks, to see how many people reviewed them using the words beautiful, pretty, picturesque, and stunning to reveal which landmarks people consider the most beautiful.

Top 5 Most Beautiful Landmarks In The World 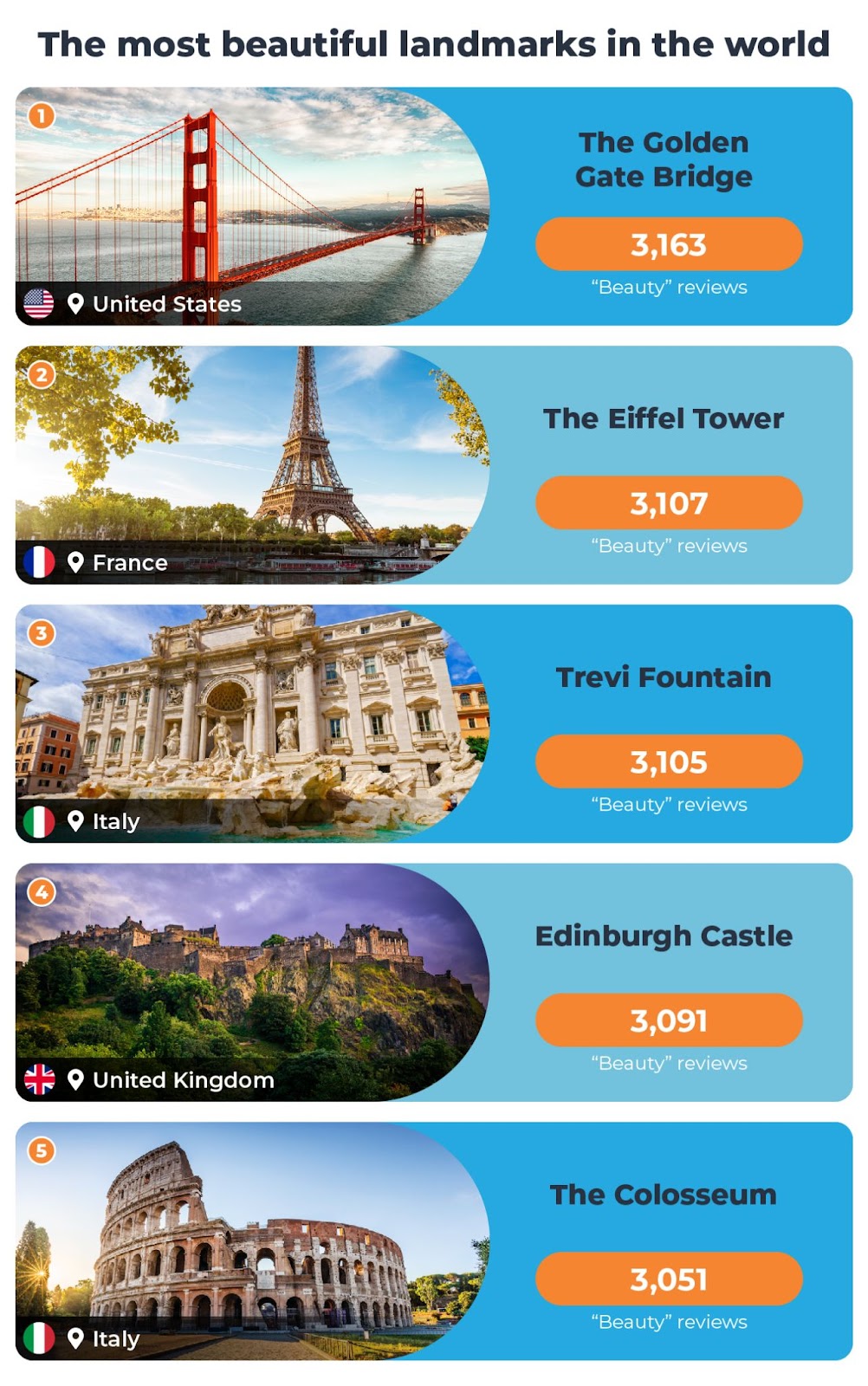 This landmark is one of the internationally recognized symbols of San Francisco. It is believed to be one of the most photographed bridges in the world, boasting spectacular views of the San Francisco Bay through the rising fog, so it’s no surprise this landmark ranks first on our list with 3,163 reviews.

Coming second in our ranking is one of the world’s most identifiable landmarks. This tower has been imitated all over the world, in China, Las Vegas, Greece, and fittingly Paris, Texas due to its beauty. The tower was originally meant to be demolished after 20 years but became such an iconic landmark in Paris that the French government decided to keep it. It welcomes nearly 7 million visitors a year who enjoy spectacular views of the Paris skyline.

One of the oldest water sources in Rome, the Trevi fountain is noted for the intricate and beautiful baroque artwork that surrounds it, with statues representing important aspects of the city. This and the fact it has featured in the classic films La Dolce Vita and Roman Holiday make it a popular spot for tourists wishing to take in its iconic look, as a key landmark in Rome.

The highest-ranked castle on our list, this iconic landmark dominates the skyline of the old city, perched on top of an extinct volcano. It is noted for its beautiful views over the Scottish city and the pretty St Margaret’s chapel featuring the original ornate arches and more recent stained glass windows.

This ancient ruin is one of the most recognized landmarks in Rome. It is the largest amphitheater ever built, and the largest still standing despite being nearly 2,000 years old. This ancient architectural marvel draws nearly seven million visitors annually, with 3,051 visitors describing the landmark as beautiful. 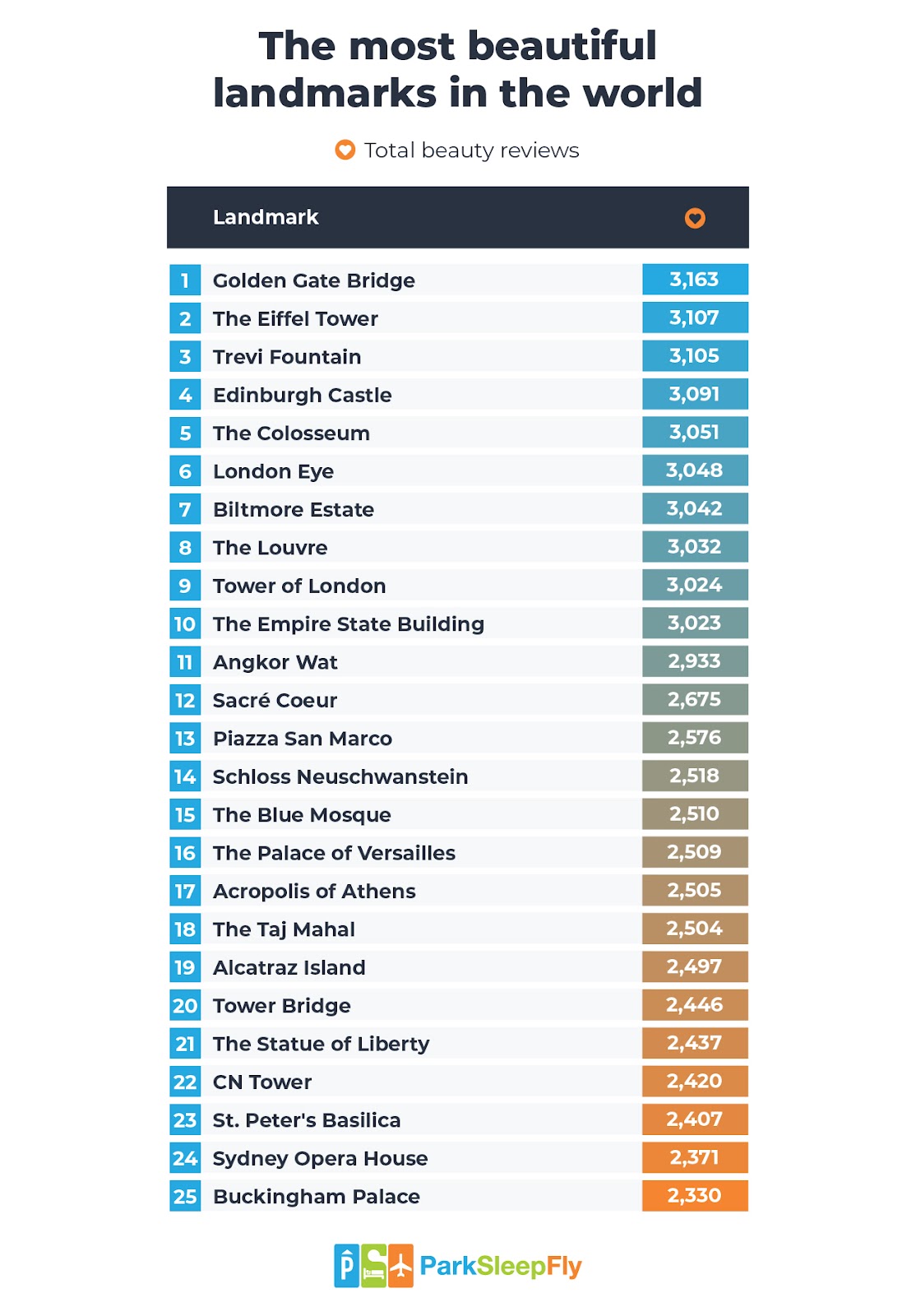 5 Most Beautiful US Landmarks

Golden Gate Bridge is one of the most recognizable landmarks in the US. Stretching a mile across the Golden Gate strait this iconic structure was considered an engineering marvel, being both the longest and tallest bridge built, at the time of construction. It also stands out as a landmark due to its distinctive orange paintwork which complements its natural surroundings, with 3,163 reviewers remarking on its beauty.

Coming second, this national historic landmark in Asheville, North Carolina was the largest privately-owned house in the US taking up 178,926 square feet. The estate is renowned for its beautiful architecture, which 3,042 reviewers agree with. The main house was built in the Chateauesque style featuring sculptural ornamentation both inside and on the exterior as well as the park-like landscape gardening. It now serves as a museum and tourist attraction.

This skyscraper is an icon of the New York City skyline. It was the world’s tallest building from 1931 until the construction of the world trade center in 1970. Designed in the Art Deco style, The Empire State building’s height and observation decks have made it a popular destination for tourists, attracting over 4 million a year, 3,023 of which agree the landmark is beautiful. Added to this, its appearance in over 250 TV shows and movies has solidified its status as a cultural icon and symbol of the city.

The second New York landmark on our list is the September 11 Memorial and Museum. This landmark commemorates both the 2001 and 1993 attacks on the World Trade Center, documenting its impact and continuing significance. Visitors to the thought-provoking memorial can visit the two reflecting pools which mark where the towers stood.

This former prison is the second San Franciscan landmark on our list. It has become a major tourist attraction, with around 1.7 million visitors annually flocking to experience the rich history of this iconic island, which 2,497 reviewers agree is beautiful. The island also boasts beautiful views of San Francisco and hosts enchanting gardens and grounds. 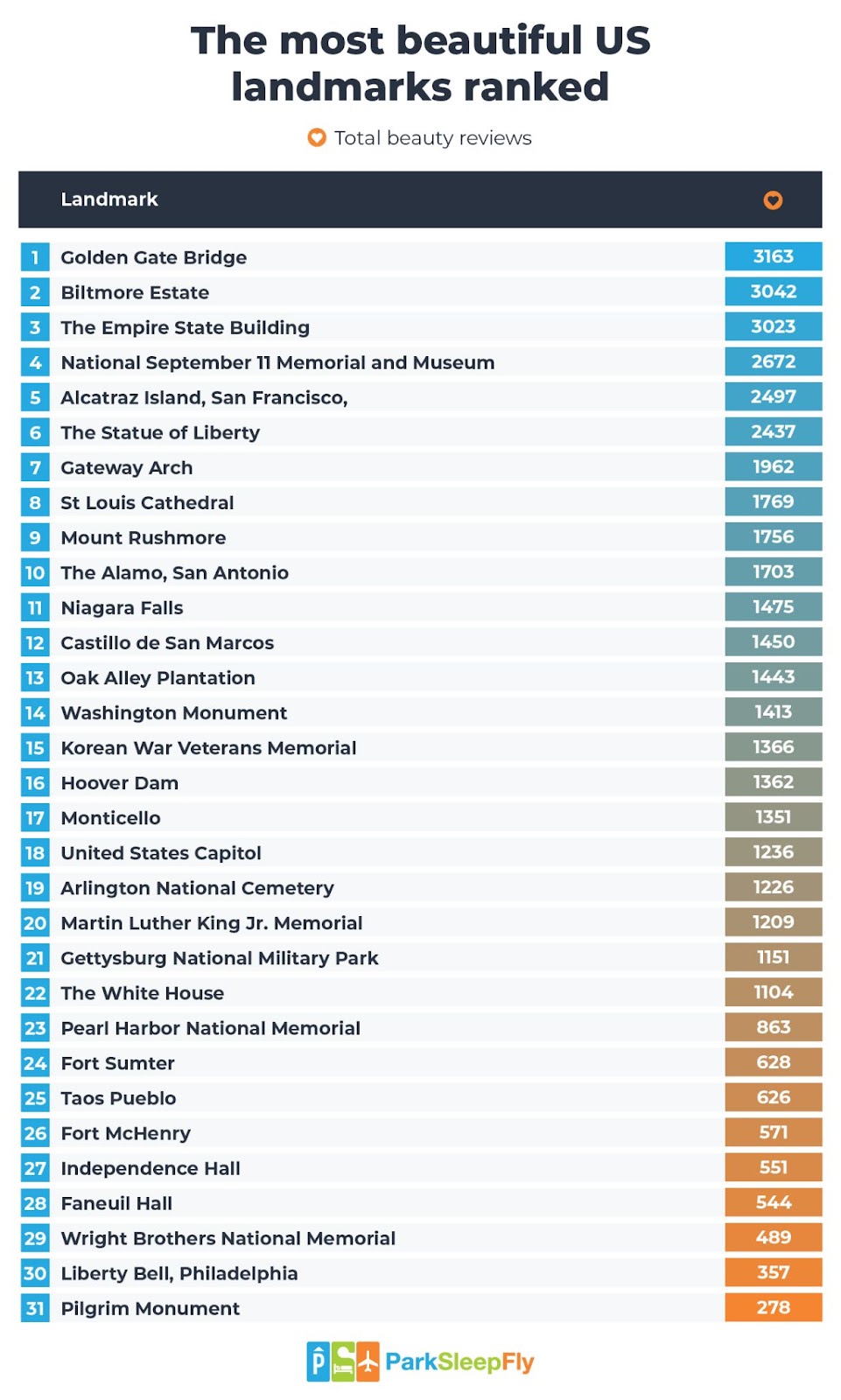 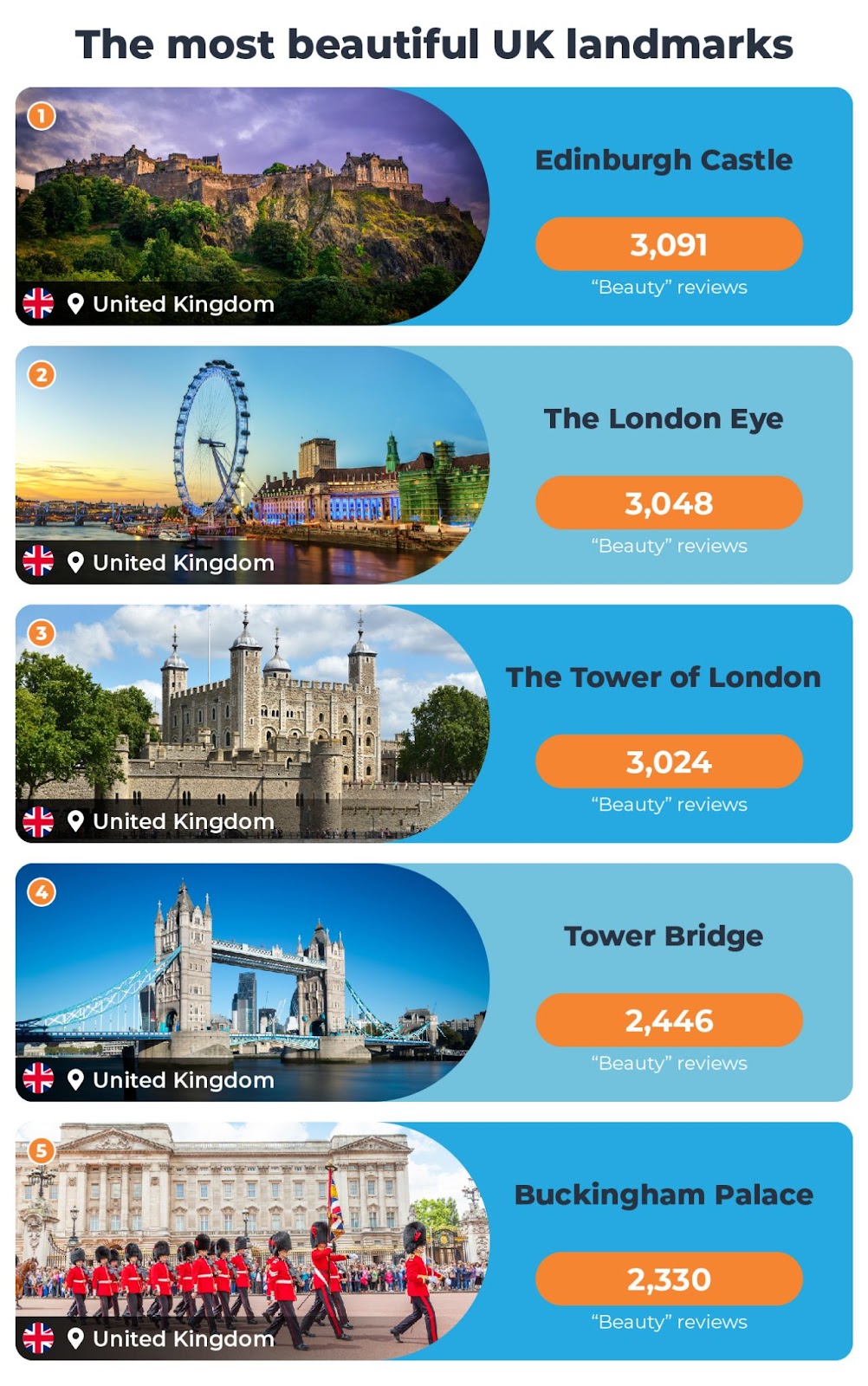 This historic landmark is the second most visited paid tourist attraction in the UK, as well as being one of the most iconic attractions in Scotland. The ancient fortress looms over the Royal Mile, providing a pretty view of the city.

This key feature of the London skyline provides panoramic views of the city from Europe’s largest Ferris wheel. Because of this, it is the UK’s most popular paid tourist attraction attracting some 3 million visitors annually. Like the Eiffel Tower, this landmark was also initially considered temporary before popular demand ensured its permanent status as an iconic landmark in the UK capital.

3. The Tower of London

The second historic castle and second London landmark on our list, the Tower of London lies on the North bank of the River Thames in central London. It is noted for its rich history as both a prison and palace. The Tower is also renowned for its beautiful medieval architecture and grounds with stunning views of the modern city, with 3,024 reviewers describing it as beautiful.

One of the most iconic landmarks in London, Tower Bridge has approximately 40,000 crossings every day, making it an important part of the city as well as a cultural icon. The bridge has become a popular lookout point for tourists to enjoy views of London as well as experience the amazing feat of engineering and an excellent example of Victorian architecture.

This palace was originally built in 1701 and has been the official residence of the British royal family since 1837. It is considered a place of national rejoicing or mourning for the British people and is full of British history as well as beautiful gardens.