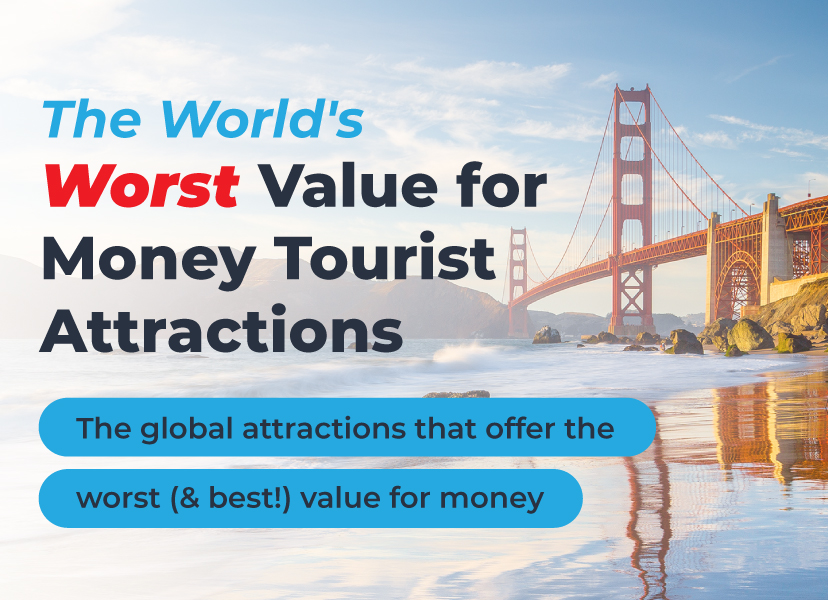 The global attractions that offer the worst (& best!) value for money

Global travel is finally starting to open up once again, with many people looking to book their first overseas vacations in a long time.

And with lots of people eager to tick items off their bucket lists, the world’s major tourist traps will be gearing up for an influx of visitors.

However, before booking your airport parking and your tickets, it might be an idea to step back and consider the costs of visiting these well-known landmarks.

To try and help you out, we’ve taken a look at the entry price to some of the world’s biggest attractions and compared them with how well-reviewed they are, to reveal the worst and best value tourist attractions in the world. 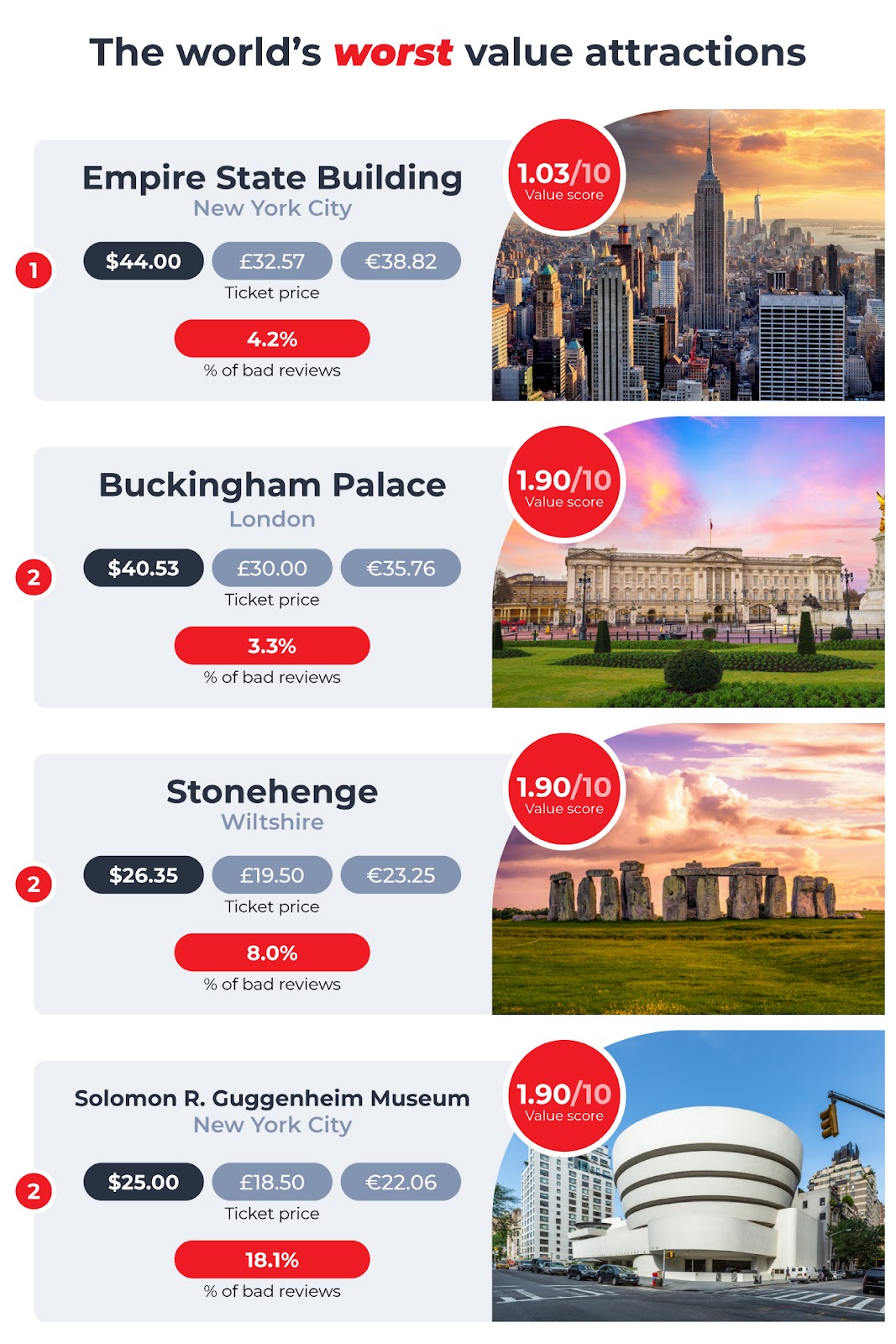 While it’s undoubtedly an iconic NYC landmark, to head up the tower costs a very steep $44 (and that’s just to the main deck, not the very top). When combined with 4.2% of the building’s reviews being negative, the Empire State Building is named the worst value attraction on our list.

Three attractions were tied with a value score of 1.90 out of 10 in second place when it comes to the worst value attractions, two of them in the UK and one in the States.

To visit the State Rooms at Buckingham Palace will cost you $40.53, with 3.3% of visitors not being impressed with their visit to the home of the Queen.

Stonehenge is a famous UK landmark, although it appears that a number of its visitors aren’t too impressed, with 8% of reviews being negative.

Visitors to the ancient monument have to pay $26.35 to visit, but criticisms found on Tripadvisor include the fact that you aren’t allowed to touch the stones, which one disgruntled reviewer described as “just a bunch of rocks”.

The main reason it scores so poorly here is due to the high number of people who left the museum unsatisfied, with almost one in five reviews being either ‘poor’ or ‘terrible’. 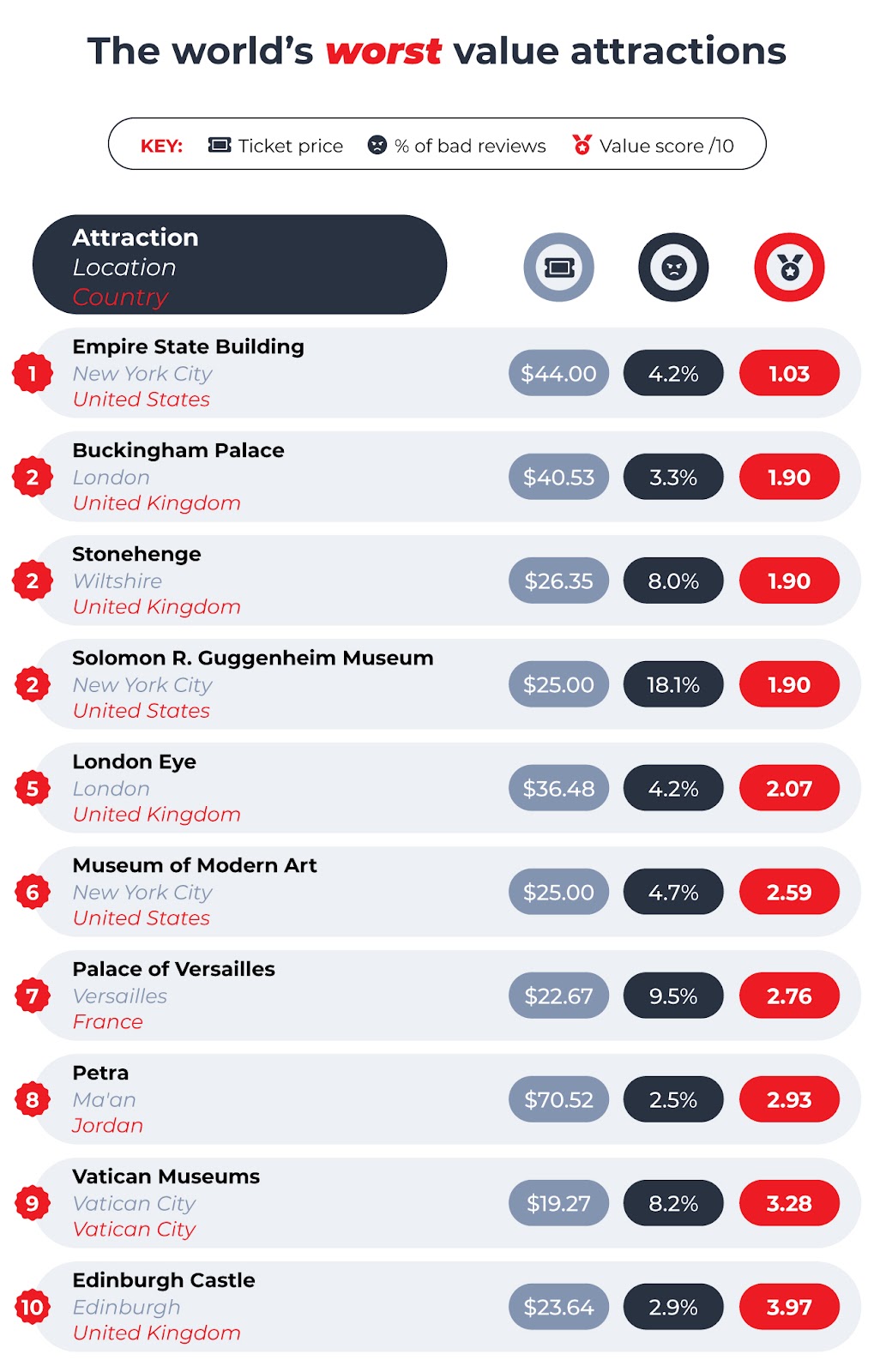 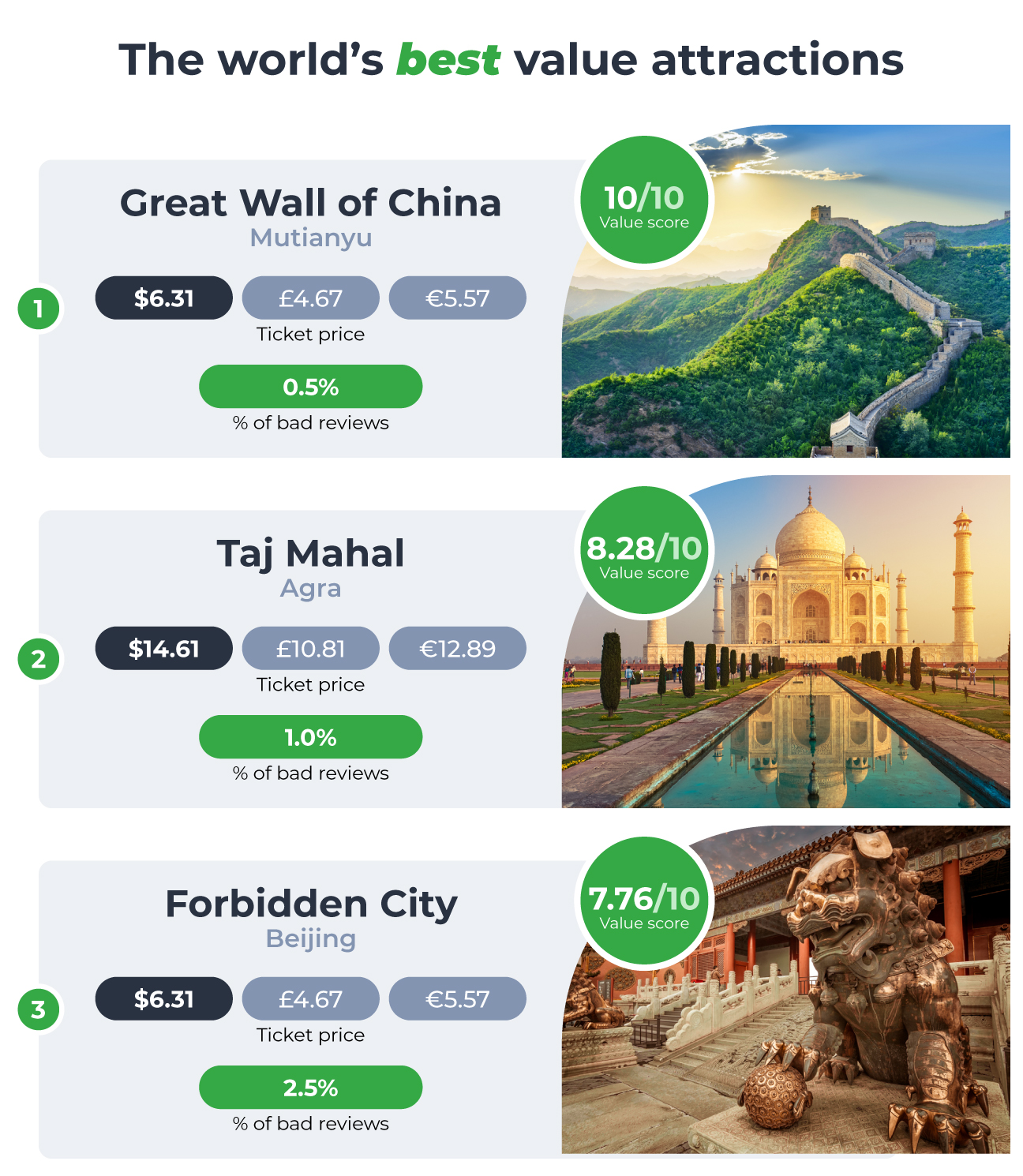 Not only is the Great Wall of China the cheapest of the attractions that we looked at, with an entry price of just $6.31 for the Mutianyu section, it’s also the one with the fewest negative reviews.

That’s incredible value for money, especially for one of the modern Wonders of the World, with some of the fortifications dating back as far as the 7th century BC.

The Taj Mahal is another iconic landmark in Asia, known for its majestic ivory-white marble and admired for being one of the most beautiful examples of architecture in the world.

It’s also very affordable, with an entry ticket costing just under $15, while just 1% of people who have visited the Taj Mahal have left a bad review, representing excellent value.

Another Asian attraction completes the top three best value attractions, with the Forbidden City in Beijing costing the same as the Mutianyu section of the Great Wall at $6.31. The Forbidden City also only has marginally worse reviews, with just 2.5% being negative.

The Forbidden City is a huge palace complex in China’s capital, at the heart of the Imperial City, surrounded by opulent gardens and temples. 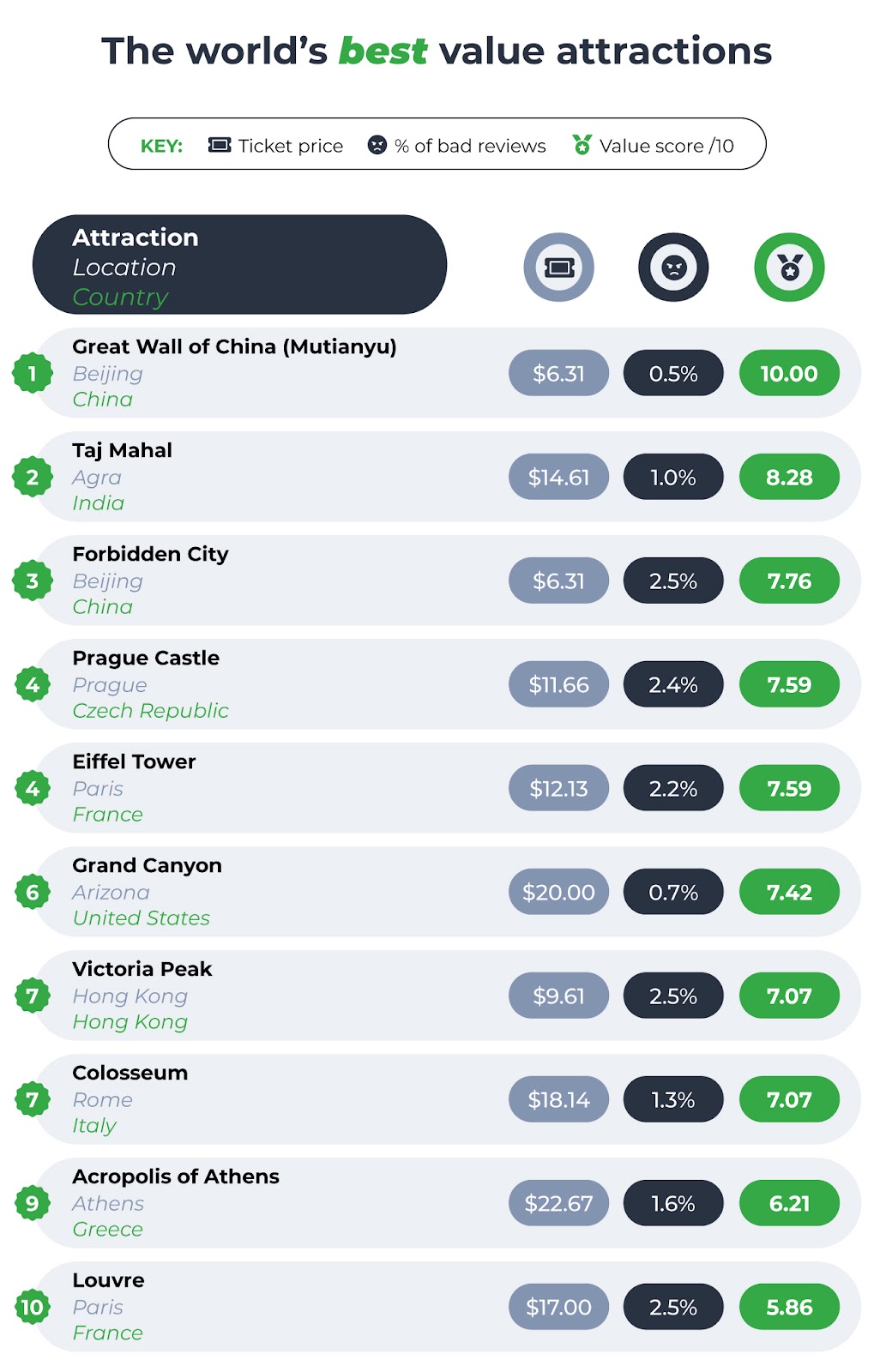 Theme parks are amongst the world’s most visited tourist attractions, but their high admission prices in comparison to most other attractions make them hard to compare when it comes to value for money, so we’ve taken a look at them separately.

When it comes to the worst value parks, Universal Studios Florida takes this dubious honor, with a day ticket costing $109, but with 7.8% of reviews for the park being negative.

However, Disney theme parks weren’t far behind, with each of the next six worst value parks falling under the Disney banner.

On the other hand, the majority of the best value theme parks were located in Asia, with the best of them all being the Everland Resort in South Korea, with a daily ticket cost of $41.75 and just 2.3% of reviews being negative.

Looking at a list of 30 top tourist attractions from around the world (as well as a selection of top theme parks), we took both the ticket and the percentage of bad reviews.

Ticket costs were sourced for a single day’s admission to each attraction for an adult, taking the cheapest available ticket, with prices being sourced from the websites of each attraction. Full sources can be found here.

Reviews were sourced using Tripadvisor, taking the number of ‘poor’ and ‘terrible’ reviews and calculating them as a percentage of the total number of reviews for each attraction.

We then gave each attraction a ‘value score’ out of ten by giving each one a normalized score out of ten for both its ticket price and percentage of bad reviews and then taking an average of these two scores.