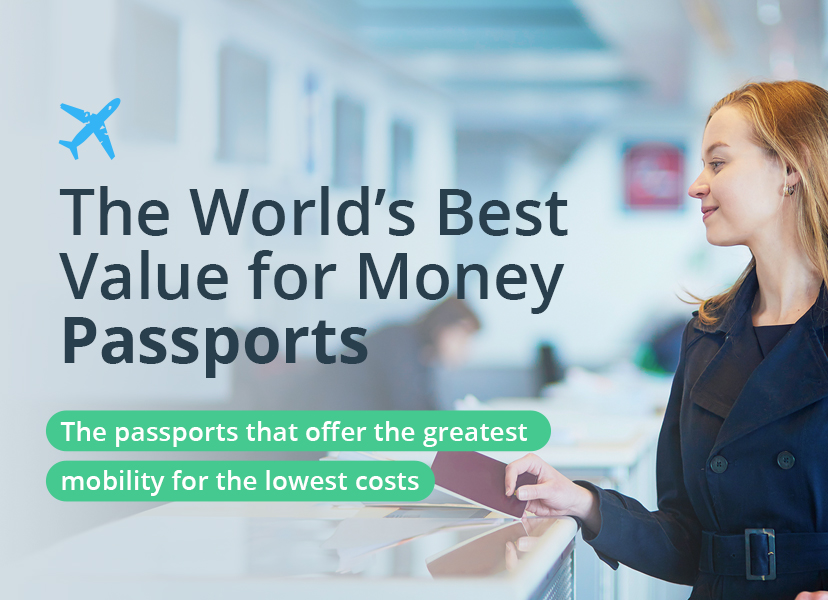 The passports that offer the greatest mobility for the lowest costs

We all need a passport to travel around the world, but the freedom that comes with your passport can vary quite a lot depending on where you live.

Not only this but the costs of applying for one can differ drastically too, meaning that a passport can prove to be much more valuable for some countries than others.

Taking both the ‘power’ of a passport in terms of the number of countries you can visit, as well as the cost to buy one, we’ve revealed the world’s best value for money passports.

Once you’ve got your passport ready and made sure it’s safely packed away, be sure to book your airport hotel and airport parking to save time and money at the airport.

Note that countries for which reliable data was not available were omitted. 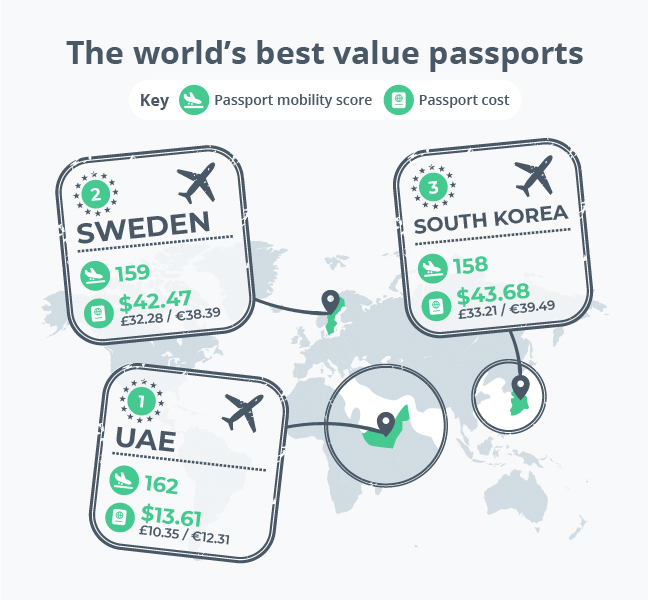 The passport that comes out as having the very best value for its holder is that of the United Arab Emirates.

Not only does an Emirati passport give its holder the greatest freedom (able to travel to 110 countries visa-free and a further 52 with a visa on arrival), but it’s also the cheapest passport to obtain, costing just 50 dirham, which is equivalent to around $13.61.

The UAE Ministry of Foreign Affairs and International Cooperation stated in 2017 that it wanted the UAE’s passport to be one of the strongest in the world by 2021 and it seems that they achieved this aim!

In second place is the Swedish passport, with a joint-second highest mobility score of 159, as well as costing just $42.47 to obtain, which is relatively affordable by global standards.

Sweden is of course part of the European Union, as well as the Nordic Passport Union, and Swedish nationals can enter 115 countries visa-free (more than any other country) and a further 44 with a visa on arrival.

Not far behind Sweden is South Korea, where a local passport will allow you entry to one free country, whilst also costing just under a dollar more to apply for.

A South Korean passport has a mobility score of 158, just one less than Sweden, due to the fact that its holders get visa-free access to 114 countries, as opposed to 115. 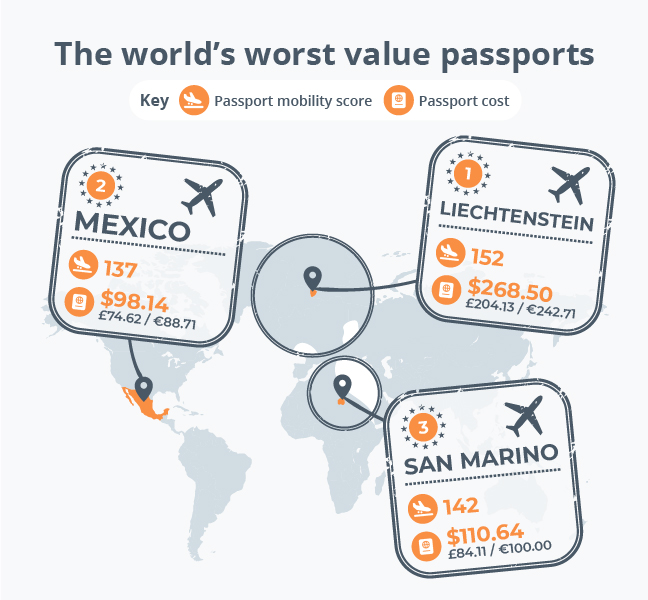 At the other end of the scale, the passport that proves to be the worst value for its holders is that of the tiny state of Liechtenstein.

While this passport does allow you to travel to a decent number of countries, with a mobility score of 152, the reason its such poor value is largely due to its cost, with residents having to pay over $260 to obtain a Liechtenstein passport.

Mexico is the country where a local passport gives you the least freedom to travel, with a mobility score of just 137, which means that you can only visit 97 countries visa-free and 40 with a visa on arrival.

To compound this, it’s also not particularly cheap to obtain a passport here, with a cost of Mex$2,000, which equates to just under $100 for a six-year passport.

Like Liechtenstein, another tiny European country comes in third place, with San Marino having a mobility score of 142 and a passport cost of $110.64.

This being said, San Marino is one of the few European passports that allow you to travel to China visa-free and offers one of the longest visa-free stays there too, at 90 days.

Each country was analyzed on the following two factors, with each being given a normalized score out of ten for both factors before an average of these two scores was taken to calculate the passport value score out of ten.

Note that countries for which reliable data was not available were omitted.

A score sourced from the 2022 Passport Index, with points being given based on the number of countries that travelers can visit visa-free or with a visa on arrival.

The Passport Index updates its figures in real-time, these figures were sourced on March 16th and are correct as of this date.

The cost to apply for a passport in each country, with figures sourced from a variety of sources, which can be viewed here.